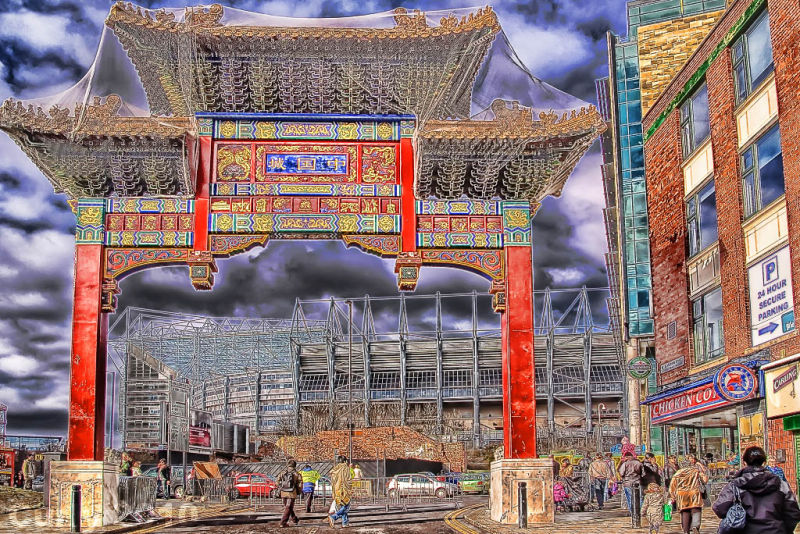 Leave through the gate please.

A series of shots taken during the Chinese New Year celebrations in Newcastle -Upon-Tyne on 14th. February 2010. Newcastle is our regional capital and is only a few miles along the River Tyne from South Shields, the celebration lasted most of the the day and attracted huge crowds.

Much of the activity centred around Stowell Street which is the cultural base for a large oriental community.

This huge traditional Chinese gateway was erected through the joint efforts of the Chinese community and Newcastle City Council, it is situated at the junction of St. Andrew's Street and Stowell Street and behind it towers St. James' Park, the home of Newcastle United football club. This is where we left at the end of the day.

Many of you have wondered how these pictures were processed, I have NOT used HDR, these RAW files were converted in Adobe Camera Raw and then saved as .jpgs which were then imported into Photoshop. From there I employed the LucisArt 3 ED/SE plug-in, (including the double portrait black and white shot) which has a variety of interesting artistic features. Sorry that many of you thought that they were HDRs.

I hope you enjoyed this series, I return to pictures of South Shields tomorrow with a short series of HDRs taken in the Marsden Bay area, which I'm sure you will like.

@Chris Pereira: Chris, can I invite you to return and read what I posted about this series of pictures?

Thanks for the processing explanation, I haven't heard of this plugin, but the look is similar.

You strike again with this plug, well processed pal

Dreamy. Otherwordly. Has the gate been covered in a shroud? Works beautifully with the sky. Great!

@Bettina: Looks like some sort of net to prevent starlings from roosting there, Newcastle has a huge problem with these birds.

These images have been an eye opener in terms of processing..I really like what you do - thanks for listing the process you use to obtain this..one day I hope to have a chance to have a go myself at this sort of shot!

I was surprised to know this not to be HDR. The gate is really attractive and the clouds is mysterious.

to tell you the truth, I like the subject matter but I am not sure if I like the processing - feels a bit too much to me! :(

even stronger HDR. This time I think it gets in the way just a little

there is lots going on here...my eye seems to wonder off into different directions..dont know if its a good thing..

Very strange colours. What planet is that? :-)

WOW what an amazing setup and amazign shot of it, the Lucas plug it does give an amazing depth to this

its vibrating in my eyes

Absolutly amazing! The colours, the textures, the architecture.. everything is beautiful

I like very much the way you are doing such pictures. Cheers Curly from Morocco.

Not HDR but looks like HDR. Great and powerful illusion. Suits so well this huge chinese and colorful door.

The processing allows so much detail to be seen. I like the red which is very dominant. The stadium in the background is interesting.

The top of the arch looks like it is wrapped in a spider web. Lot's to keep your mind busy.

Love the detail that is captured in the patterns on the gate. But that netting sure takes away from the great ornamentation seen below it. Is the netting something permanent in nature, to perhaps keep birds out/away?

@Steven: Yes Steve I believe it is, which is a pity because much of the original detail becomes hidden from view.

Curly, would this be basicaly the same process as tone mapping a single image in photomatix ?

@chuck: No Chuck, this plug in offers a range of artistic effects which alter the details and/or smoothness in a localised range of pixels without affecting the original light levels.

I think the filters applied really do work well with the extraordinary detail in the gate, and the stadium behind.

I like this series with the over the top post processing, I guess you had a lot of fun!

amazing colors, I didnt realize you had such a high Chinese population there? thats really interesting, Iv really enjoyed this series btw.. great work as usual.

thank you for sharing how you made this amazing picture!

Nice series of images, I enjoyed viewing them.

That was an interesting series..also followed your link and explored the plug-in...unique..had never heard of it..as for this image here its awesome...great details and colors..and quite similar to the Montreal china town entrance..thanks

Hi, trying to choose a favorite of your fascinating takes was impossible. They are many very surreal. I love the captured fine detail, that yet blends in with the overall image. I recognize some of the applications that photoshop offers that allow you to alter reality, make Art of the great scenes and portraits you focusss on. What a gift to everyone. I can actually feel your great affection and appreciation for life as recorded in your images.

@Joyce: Thanks for your comments Joyce, digital photography for me opened a whole new array of possibilities for artistic interpretation, in a way that I did not find possible with 35mm.

wow! all praises for this one. good job