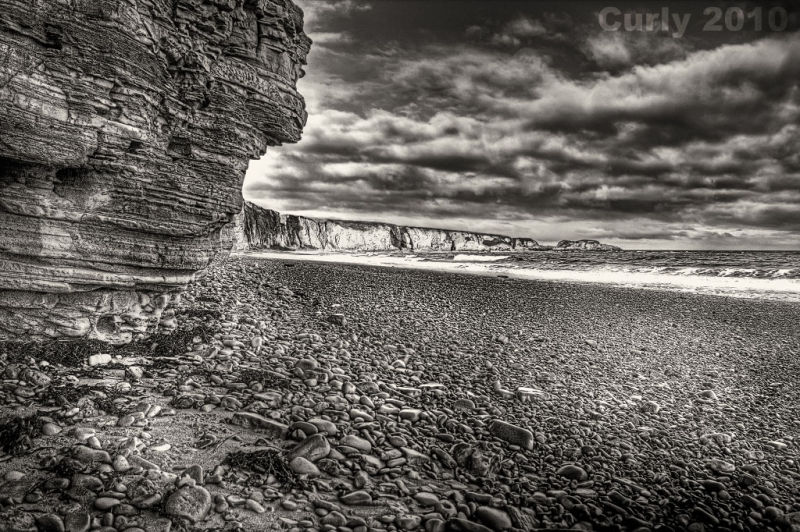 This is Marsden Bay in South Shields looking towards Camel's Island (just separated from the headland).

This started life as a five shot HDR processed in Photomatix, it was further converted to black and white with Nik Silver Efex. I was pretty struck by the level of detail under the cliffs.

Fascinating...the rocks in the foreground look like drops of oil on water!

interesting hdr, it almost looks out of this world.

Jerry - a moment in time [...] from Chicago, United States

Wow, now that's what I call a b/w landscape shot. The clouds add a lot of drama!

a grand one, real nice texture

A very cool result from the processing combinations. I must admit I tend to turn HDR's into BW... don't really know why, though!
Great job!

So crisp, i think i could grab a pebble right now and throw it, super sensation !

Very nice.. composition.. and framing by itself.. Love this the vast expanse in the front of my eyes.. i can always feel freedom.. when i see so huge space..

Really outstanding!
It's great in B/W!

I like the tones and details in the foreground cliffs. I'd have been tempted to work on the clumps of seaweed a little, maybe a bit of burning or contrast-stretching to distinguish it from the rocks.

With some trepidation, because I know you like to create a painterly look, while I'm very firmly in the "realistic" camp...

It's a matter of taste, and of what you're trying to achieve, but for me the sky doesn't work on two levels. First, it doesn't make visual sense to me in that it's darker than the line of cliffs and the sea that it should be illuminating; second, the contrast pulls my eye away from the cliffs and beach where (I think) the real interest lies.
I'd love to see this one with the sky brighter and more muted.

I don't know how you feel about Photomatix's characteristic halos (beside the cliffs) and pools of light and shade (on the beach). It's an interesting effect with some subjects, but a bit of a pain if you're going for a realistic look. For the latter, you might like to take a look at Picturenaut (which is free), or EssentialHDR or HDR PhotoStudio.

Your mileage may vary, as they say :-)

@Spike: Actually, looking at the originals, that area of cloud above the cliffs is quite burned out and over exposed, not a result of the light smoothing which was set medium to high for this. The light and shade on the beach are of my doing, dodging and burning, (perhaps in inappropriate areas.) Thanks for the links, I'll have a good look.

Charles B. from Mably, France

Quite the dramatic result you achieved!!! great detail.....i've played a little lately with converting to b&w.....but just don't know "when to quit"......with the contrast, etc.....

Sandstone? Looks very similar to the rocks on the Moray Firth with those lovely strata lines

Great details in the foreground. I like the light.

To make a long story shot : 5 stars.
Strong and powerful seascape, enhanced by your great processing. incredible. I would love to have it on my walls. Thumbs up.

woah! this is epic! love this shot.

This has the look of fine pewter - wonderful detail, Curly.

Outstanding POV. I love the sky.

The detail is just amazing, and nice choice on the b&w!

Amazing... a breathtaking picture! You're doing miracles with HDR! :)

WOW ! Good one here Curly. A good candidate for the combination of b&w and the processing you usually do. I think its a good range of tone all the way across. Fairly balanced out. Maybe a touch heavy in the sky, but still awesome.

Good evening, Curly,
It is a giant spectacle. The whole scene comes through the color selection, great expression. For that I give you 5 stars *****
I wish you a pleasant evening. Dear greetings Christel

These blacks and whites are dramatically magnificent.
Is it about an assembly? What would deprive nothing of the strength of the image.

Yes, the tumbled and polished rock has some great detail to it. Works very well in B&W.

love the detail...you're also tempting me again to buy some more Nik gear!

The details are really stunning. We have the same workflow (Photomatix + Silver Efex)!

answer your question: No, I use an action

you've got some super shots on your site. quite surreal in places.

Wow Curly, this is a impressive landscape. Love the B&W here. Great shot!

5 stars, for the processing

So much gorgeous detail. I love your B&Ws!

The HD works really well with this shot.

rocky shoreline indeed, not a bare foot type of place is it... Beautiful shot Curley, yuo should be very proud of the work your putting out, I Love it

These cliffs are gorgeous! I'm impressed with the detail in the foreground! Amazing rocks and plenty of textures! :)

Very nice...I rather like the look of the ominous sky. If it were too light I believe it would take away from the scene

Like a planet surface far far away - for me pure science-fiction - brilliant! :-)

Congratulation with your new "Moon gray" skin, which I only left because of the weak color of the Title text on the Home screen (apparently because Am3 need a link for community purposes, and they don't want to change the coloring).
This B&W HDR picture is of my liking, because of the many fine grey tones as opposed to the contrasts in the extremely sharp colored HDRs.
I've heard many prasing tones on Silver Efex. I happen to own DxO Film Pack which includes also a number of B&W options, so hope I can get by for a while without the Silver Efex?

@Henrik Herskind: One of the benefits of Nik Silver Efex is that you can create your own styles and save them as presets for one click editing, a boon!

I like this shot best from that beach series - very balanced and I´m not too overwhelmed by the details in colour ;D looks like a modern etching, lovely.

End of the world