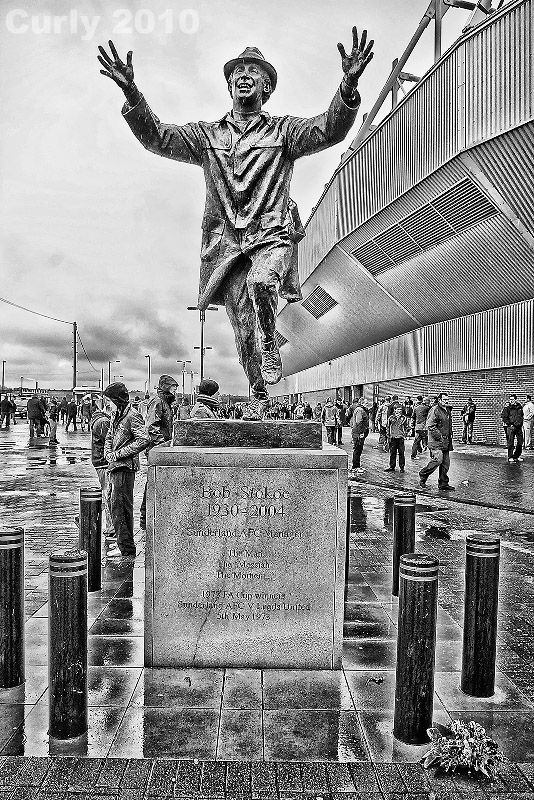 Please stick with me as I indulge myself with one of the other loves of my life, Sunderland AFC, who play their football (soccer) in the English Premier League.

Today I start at the beginning of a photo story showing some of the fans and peripherals around a game at the 48,800 seater Stadium of Light, all the pictures were taken on Saturday 20th. March 2010 when Sunderland defeated Birmingham City by a 3 - 1 scoreline. Unfortunately I won't be showing pictures from inside the stadium during the game because of some weird image copyrights held by the club and the Premier League.

South Shields lies in between Sunderland and Newcastle and the football fans here are evenly split between the north-east's two major teams, I've followed Sunderland since I was a very young boy and have experienced both joy and heartbreak as a result.

Bob Stokoe was an absolute legend in the north-east of England, having played football for our bitter rivals Newcastle United he forged his managerial career in the clubs of the lower divisions including Carlisle before arriving at Sunderland in 1972 when our fortunes were low. Sunderland were a 2nd. Division side then and under his management he took the club to Wembley in 1973 where we beat Leeds United, who were without doubt England's best team of the time, in a legendary FA Cup Final. The statue erected in his honour after his death depicts the unforgettable moment at the end of that cup final when Bob (the Messiah) raced onto the Wembley turf to embrace goalkeeper Jimmy Montgomery who had pulled off one of history's greatest ever double saves that prevented Leeds from scoring.

Bob was well regarded and was a real gentleman.

This statue just jumps right at ya! Nice work!

It's a good hommage, and the processing of the photo is outstanding: how did you make it?

@Paco Díaz: It was filtered first with the Lucis Arts plug in then converted to black and white using Nik Silver Efex.

Great processing Curly, this is wow!

very nice processing for this man :)

WOW! This is an amazing processing.
So cute!

What a character ......... the statue and the photo are great tributes.

This looks like a sketch...you do some pretty cool stuff! I liked the Bob Stokoe history lesson as well!

love the processing, n the lil bit of history

Wonderful poise/pose and you have captured the sculptors intention well

Giving away my age, I remember the moment and it's a fitting sculpture.

@Ted: I was only a teenager (17) and didn't get a ticket for the final, but when Porterfield scored that goal the ceiling got well sprayed with beer! I was in tears as Bob Stokoe embraced "Monty".

I found the post processing a little too much but still its a great inspiration!

Lovely! And very intresting your serie about Sunderland.

Wonderful processing... as a drawing...
Nice to learn the story of this man !

A beautiful tribute to a well respected man Curly! Bravo! ;-)

The interest has been felt for the portrait like the technique of the etching.

What an awesome and joyous moment forever captured--and a perfect addition to this series!

Splendid capture of this most engaging sculpture. Worthy of your hero.

The MaJor from TM HooD, Iran

Charles B. from Mably, France

Good evening, Curly,
Bob Stokoe took over I really interesting information on the Internet. He was a great football player. The original photo of the monument, I found there also, and received by a more precise mental image, from your current presentation. I admire your creativity and trying to understand your pictures. The inscription on the monument is very well visible. I like your presentation very much, as well as the explanatory words about it.
I wish you all the best and thank you for your nice comment. Dear greetings Christel

Cool processing, very suiting! And a very nice touch to write about your team. I wish Sweden had some football teams worth looking at... I´ll have to stick to Champions League and the Primera Division once in a while on TV. Oh, and thanks for your suggestion on my post, I´ll try that. /Peter

can understand your interest here, In nebraska, we have no pro teams, but we do have the University of Nebraska, and we do have a FOOTBALL TEAM!!!! YEAH!!! o,, sorry,,,, I Digressed, Very awsome photo Curley, a pleasure to look at!

Curly, cool statue for the the normal guy!! Nice one :)

The statue is a hoot and the processing enjoyable.

Very interesting effect. I like the subject too very nice.

A legend ...this capture and b&w is awesome...seem,s you have a bit a rain in the air...wonderful work...