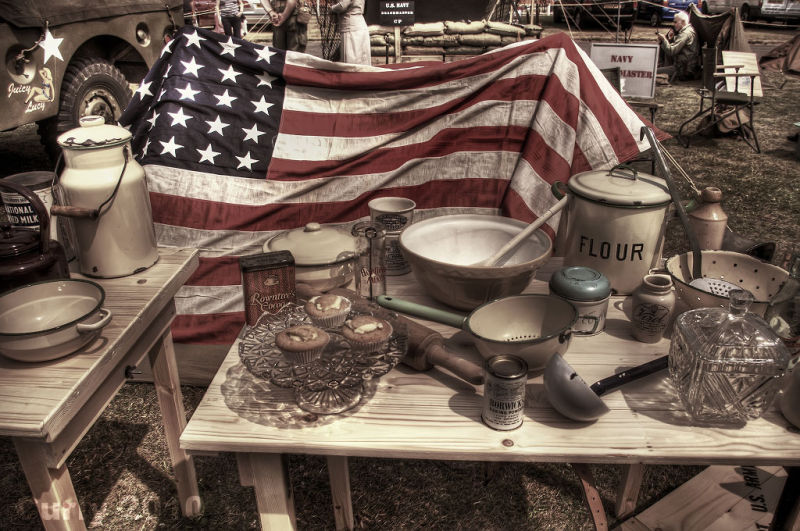 I attended a great event on Sunday in the Bents Park, South Shields organised by Hells Angels and other motorcyclists to raise money for "Support the Troops" and "Helping our Heroes", two charities dedicated to helping the families of servicemen in Afghanistan and elsewhere. I've written more about the event here.

Suffice to say, it threw up some great photo opportunities, so I'll be featuring more shots from this motor rally for the rest of this week, the difficult part will be deciding which pictures to leave out!

This was one of the 1940s styled military displays (you might spot the little joke in the title), again this was a three shot HDR made in Photomatix, it was then taken into Photoshop and a gradient mask adjustment layer was added using a black to foreground transparent gradient. This top layer than add it's opacity reduced to slightly desaturate the picture.

Finally an apology folks, I haven't been able to get around and view your pictures or pass comments yesterday, and probably today and tomorrow either, we are busy fitting a new kitchen here and my internet time has been severely limited. I hope you all understand - things ought to get back to normal next week.

I love this photo! You had a great eye! Totally cool, you can't do everything at once, one step at a time!

Back in time, this picture shows the atmosphere of past weather

Looks like an interesting event and I do like the processing with its muted colours. Happy kitchen fitting :)

Your PP really suits the subject of course. A nice tribute and remembrance from the past, and it depicts a great solidarity as well.

I like the vintage feel to this.
If you get a chance check out the photo I up-loaded today.
I think you'll like it

The Hell's Angels organized it? Maybe I have them all wrong. :) The tones are perfect for this image. And good luck with the kitchen--they can be alot of work, but well worth the effort!

A perfect photo for we in the US as we celebrate the 234th birthday of our independence.
Having been a child in the 40's, some of these items look pretty routine to me. :D
A new kitchen makes for a happy wife!

I love the feel! Very nice!

a fine collection he got there

This is very cinematic too, i picture nurses and military wounded guys they come & take care of. I especially like the very very nice muted tones.

SOUL AFLAME from The bosom of Mother Nature, United Kingdom

A cracking shot, Curly, demonstarting perfectly your prowess with both camera and lens, and with your processing skills. A gem.

This is a great scene with bang on processing.It´s a very worthy cause and as an Ex-Seviceman myself I also support "Help for Heroes" !!

It truly looks like something from out of the 1940's.

Beautiful composition and a timely one for those of us in the States. Great job on the processing and I look forward to seeing some HDR's of your kitchen. ;-)

Hey CurLY wirly what that american flag doing in the UK? ;)

really well done here Curly, I have a question, these hell's Angels, are they British? or Americans living in England?

Absolutely love the grittiness of this composition and the color with the flag as a backdrop.

Great to see that you are very active Curly. As usual you have a lot of new nice shots. This one I really love. Very cool processing and motive.