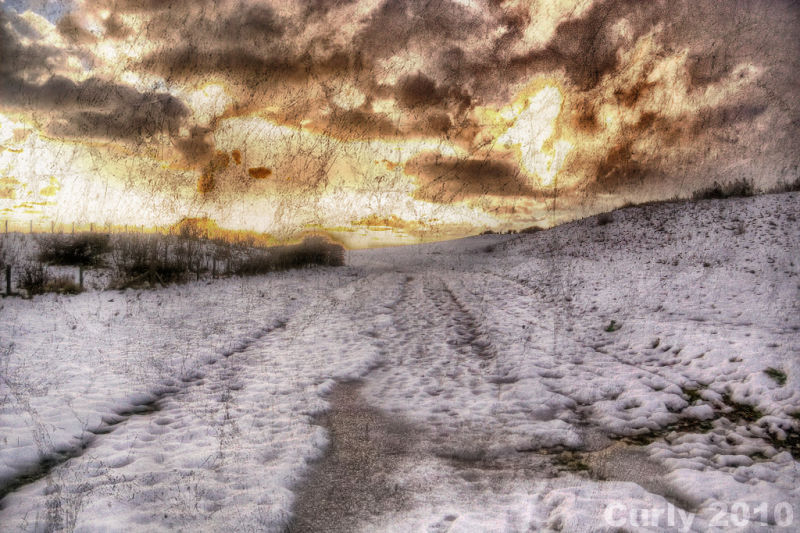 7:30 am, the winter sun rises just to the south-east of Souter Ligthouse, South Shields. This was the view - the temperature was minus something (then a bit less), it was so so cold as I snapped the three hand held shots that would make the HDR, but it was my nose which was feeling the worst of it.

The walk around the coastline of Marsden and Whitburn provided some great shots that morning as we woke to a freezing blanket of snow, it was early in the winter for this sort of weather, but at least it replaces the landscapes with some fresher views.

Despite my best efforts the shot turned out disappointing with a large area of burn out in the sky, so it was "rescued" with a bit of texturing. It could have done with a walker, or a figure, even a dog, but I was the only person around.

I like what you have done with the texture. It makes it look like it's a view through an icy window ^^

if i may say so - the result merits your suffering! :-) excellent atmosphere, beautiful colours - very effective!

Your treatment is very effective here, Curly. The scene looks stark and foreboding.

Dreamy !!! The post-treatment is really fantastic Curly ! Great job. Have a lovely day :)

To be honest, I'm not sure about the texture. I reckon the shot would have been strong enough without it...

Love the pp treatement you have given this shot Curly! Well done! ;-)

Brrrrrrr, too cold for me ! Nice texturing !

my picture of the day: kind of depressive but mystical, honest and meaningful. i really love the processing and the effects in here. have a nice day, curly.

Good morning Curly,
The picture is fantastic. The warm colors including details harmonize beautifully with each other. The overall view gives peace and harmony. 5 stars ***** Have a nice sunny day and all the best including your family.
Dear greetings Christel

We can see that this shot is cracking with the cold! Interesting contrast between the warm light of the sky and the freezing snow drifts.

Stunning snow shots Curly. I am in a state of shock having just been transported from temperatures of 30 degrees C

Excellent texturing effect well seen, I like the contrast between the warm and cold atmospheric mood...nice perspective!!

SOUL AFLAME from The bosom of Mother Nature, United Kingdom

You've done a cracking bit pof processing on this frame, Curly and the texturing is absolutely superb. It's also a very beautiful scene as a base. Great work. My wife and I tried but could not get into our respective workplaces today due to the snowy deluge, so we had a morning like kids in the woods taking shots. Blooming marvellous.

I think it is stunning, if a painting I would definitely hang it on the wall...I would prefer a sheep to a person but it is fine without :)

It's like a scene from a fantasy novel, terrific!

nice compo,the P.P. is great on this shot cool texture!

Interesting filtering and textures here. You still made a great shot out of this, particularly a hand-held shot on such a cold morning. Next time bring a tripod and you can be the "walker, or a figure..." ;-)

Excellent shot despite your travails Curly! Hand holding a camera can indeed be difficult in the cold. This treatment is VERY effective I think...well done!

WOW! terrific work indeed,love this great mood and your brilliant performance!
have a wonderful day!

I love this shot Curly. It reminds me of an old painting whose canvas has begun to crack. The colors are subtle and intertwine beautifully with one another. Isn't it wonderful to be the only living creature up at that time of day...

marci from somewhere in..., Morocco

the effect has succeeded - you've ended up with a really cool shot!

The snow is bringing out the "Artist" in you mate !!

I heard you guys are getting a lot of snow out that way. You managed to capture it and make it quite memorable!

I'm not always a fan of textures...but this one is well applied and (IMO) really works with the shot. I like it!!

It has that slushy mucky feel - I like it !

I like the shot without a soul in it, and think your texturing job was a great call.

A marvelous "rescue" of this shot. It is now a very artful image and slightly surreal looking. BRAVO.
Wow, that's WAY too cold...the price you have to pay for beautiful snow shots...
no snow around here, so I will just have to enjoy yours !!

There's a sense or feel that an explosion has occurred some carpet bombing perhaps.

fantastic image and treatment. it really does work on this winter scene - it's exactly how winter feels sometimes -

i think the way that you have used texture is great, makes for a very interesting and somewhat mysterious shot.

Beautiful process! It's a beautiful shot!
Have a nice day.

wow, I've missed this one! this treatment fit so well with this landscape...Bravo!

Dramatic winter scene...well done...all those texture effect give this an old picture feel...

..just Thanks for your photos, for sharing them with us..