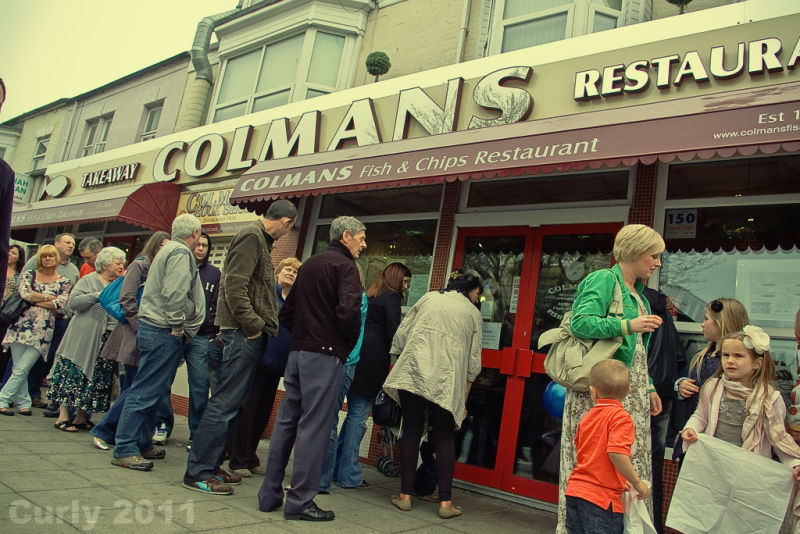 Posted by Curly (South Shields, United Kingdom) on 9 May 2011 in Documentary & Street and Portfolio.

This is part of a fairly long series of pictures taken on Good Friday (22.04.2011) in South Shields. I wanted to document some of our traditions which we have followed for over a century, and I wanted to depict them in the colours and styles that I remembered as a child in the 1960s, and for that reason I have attempted to replicate the slightly faded colours of old Agfa or Kodak prints using cross processing.

To try and retain some of that authenticity you will find pictures which are not particularly straight, perhaps not well focussed, or at an unusual angle, I wanted these to look like very amateurish "snaps" which might be found in any family album.

Rather than bore you all completely, I will break up the series with some other shots from time to time

After the parades have departed the Market Place the traditional thing to do is to follow them and make your way to the coast, enjoy some fish and chips in one of a number of outlets just as busy, and then enjoy all of the fun of the fairground and the public parks and beaches.

I once ate in Harry Ramsdens. "Proper" fish 'n chips is really different, and much better than the run-of-the-mill offering. Looks like a good queue building up

marci from in, Morocco

fantastic. I'd love to be in that queue, waiting for my portion!

@Richard: You may not be quite up to date Richard.

Street photography at its best.Good angle!

There are some tail and pressed it opens:) Superb shot. Good day.

I would love to join you here, Curly - an order of quality fish'n'chips sounds like just the ticket right now! And here you've created an image worthy of their place in the South Shields community. I love the angle you've employed along with the stellar colours and detail. Ahoy!

the buns just aren't going to come are they? Not now we are stuffed on fish and chips.

An interesting and well presented text. An image very similar to that everyone in a family album but better edited than the family! I like the tilt yet ... matches the woman who is passed out on the man! Light very different from the Mediterranean! Bon appetit ... was good the fish? A hug, Adela

@Scene by Sharon Photography: The fish is top class here, but I prefer my chips with just a little more colour. There are other outlets on the same street, so we have plenty of choice. I'm a haddock rather than cod sort of bloke.

Fish and Chips I follow a parade for that!

haha fish & ships, so typical. I never eat this, maybe in June when I'll be in London ;)

@Thomas: You really haven't lived yet.

Great angle! There is quite a line waiting to get in!

You are seriously trying to drive me mad,the thing I miss most in the Uk !! Great shot

@Anthony Morgan Lambert: So good fish and chips are a little difficult to find over there?

Seems famous Restaurant in town or no other option.. excellent low angel shot.

Love streetphotography, and this is realy great. I know it s a part off a serie, and is facinating to follow the traditions and events that you share. i learn a lot from your pitcures, and to get a bit of your culture is so interresting! And the color tones is so great to fit the rest off your pitcures and gives a nostalgick feeling. I have always wanted to try Fish and chips ,.but i have only been in London (in UK) about 4 times and forgotten it every time. Thats the first ting on my next trip to UK;O)))

Oh yum, well it looks like another one we have to try :))

nice documentary shot!
unfortunately I've never been to the UK but I hope to get there next years holiday when my 3 kids are old enough - then of coure I must try the fish 'n' chips!

@Roman: When you get here, remember to ask some locals for their best recommendations.

With that list of diners (Patrick Stewart excluded), it appears the oily greasiness comes from the customers rather than the chips.

@Zorilla: Sadly, I think Capt. Picard is cut from the same cloth.

Popular place! I gladly taste some of there specialities. Nam nam.
Like this soft colored style, just like my AGFA camera in the earlier early seventies.....

I'm sorry Curly but you've failed miserably. I don't think you can take just a 'snapshot'. All of these photos suffer from one form or another of being just good images. I like the narrative that gives us just a little more information on the events of the day.

@Rebecca: You flatter too much.

If I ever visit the U.K. again, my first stop will have to be South Shields. What a wonderful place you live.

@Kenny: Well, your first stop would probably be Heathrow or Gatwick, then big old London town, we can forgive you for that, so long as you jump on the train up north next day.

@charles: That's right, in fact it is the smell of the salt and vinegar which drags you in!

Curly, I love the colors. I am amazed that the shot is so sharp throughout with the F6.7 - amazing.

Great frame, and I love that angle. Can't get a decent fish and chips where I live and have to go all the way out to Victoria B.C. or the east coast... *stomach grumbles*

The Mouse from Glasgow, United Kingdom

Must be worth it with that queue.

@The Mouse: Oddly, it is not my own favourite plaice along Ocean Road :-)

I think this is a great series! Beautiful colors and a good story.
I enjoyed it Curly!

@❀ Yvonne Simons ❀: Thanks Yvonne, glad you are liking them.

Great tilt. Very effective in this image with this long queue

I like the low pov and the diagonals here... Nice work ! Have a lovely evening :)

A great perspective that you've chosen to capture this. Looks like everyone is lined up outside their favorite fish place for Good Friday. A nice candid shot.

wow! That's a heck of a queue for a chippy...wouldn't have believed it but for the evidence!!
And mushy peas...?

Nice photo. I shall put this on my list of Fish and Chip shops. By the way what are the large hankies for that the wee girl is holding?

@Uistnomad: I'm just taking a closer look and wondering if they are carrier bags?

I've just gone through your series, and you've done a great job documenting the holiday. I have to say, the only time I've really enjoyed fish and chips was in England (or Northern Ireland), and this has me hankering for some!

Since you ask for an opinion, I'll tell you my six pence...
I understand your aim about "old snapshots", and I think it could be fun for you to try and approach that genre, however this kind of photos have often a subjective value, as you said you have remembrances from childhood which influence your choice. An external observer, specially from a different country, may not share your vision and your values. I had a glance of those ones posted so far and this is the one I prefer, probably because it reminds me England as I have known it in the 70'. Also some of the others seems to have some interest even for my foreign eyes.

All the best,
Donato

@Longroute: Thank you very much for your visit and comment, I appreciate it.