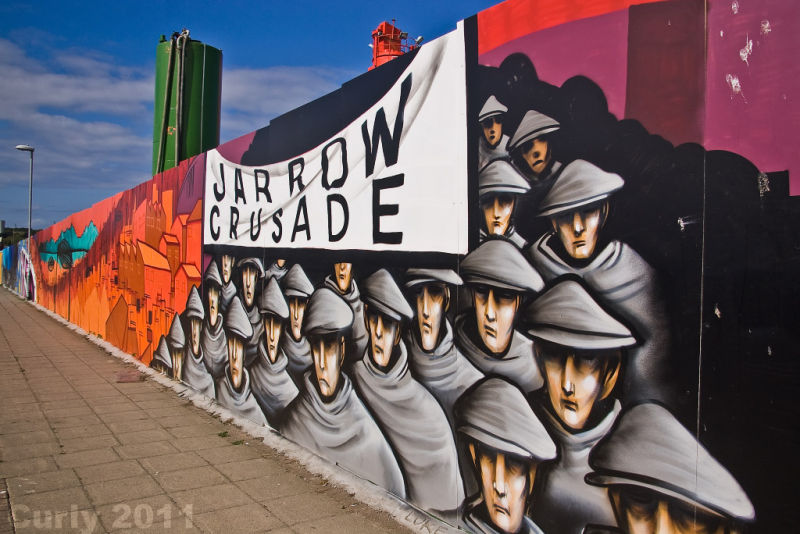 The Tyne Tunnel carries vehicular traffic under the bed of the River Tyne from Jarrow on the south bank to Howden on the north bank along the A19 dual carriageway. After two years of long work we now have two Tyne Tunnel crossings, eventually after the elder of the two is refurbished, one will carry traffic north and the other south.

Building of the new crossing caused a massive scar on the landscape of Jarrow and to hide it these hoardings were erected and a combined art and history public exhibition was provided by youngsters from The Customs House in South Shields. They have now been removed and the land has been reinstated with a pleasant green walk with new trees. This panel depicts the, now cultural and historical waypoint, the Jarrow Crusade of 1936 when 207 unemployed men from the town marched to London to demand jobs. Their MP Ellen Wilkinson marched the 300 miles alongside them but when the marchers completed their feat, very little was done for them. The ship industries remained closed and all that they were given was £1 each to get the train back from London.

I may be a little tardy in visiting your blogs over the next couple of days, I need to finish off some heavy research work on another project and would like to get it out of the way before the weekend. I do appreciate your visits and comments which continue to inspire and amaze me, your enthusiasm fires me to keep looking for new pictures and adventures around here, yesterday another milestone was passed as the 30,000th. comment was left here.
Thank you so very much for your continued support.

A neat colorful street art, and great in this perspective.

Fabulous street art. It makes such a difference to a bare grey wall or some nonsensical graffiti. Great shot Curly.

There's 2 things that spring out at me. Your generosity of spirit is so clear in your narrative, and the futility of the march shows us that even without an immediate result, commonly the any hard work IS worth the effort

Great shot of this mural, Curly. It is good to be reminded of the past as history does tend to repeat itself.

stunning perspective on this vivid colours

Fine perspective & a most interesting explanation of the event.

A wonderful mural depicting an interesting piece of local history! Hopefully it will be preserved once the construction work on the tunnel is complete. Nicely captured Curly! ;-)

Apart from the photo, i love the history and culture involved. Congratz on the 30k comments, I think i have just passed 30 ;) hehe

Nothing better than street art with a nod to the past--great compo and colors for this walkway.

A superb framing for this great street art !

The Mouse from Glasgow, United Kingdom

Good story telling with both image and text.

Curly, I like this colorful street shot, the angle is great and the colors wonderful. I like that you told us what it was all about, too..thank you:)

yes, good commentary.
so what happened to these hoardings then as they are very good (as is the capture)?

Excellent tones and textures and nice info to share. cheers!

Tim from Ft. Worth, United States

love the color and pov!

Wonderful capture of this Magnificent street art. Beautiful colors. Nice information. Thanks, Curly.
Love to be one among 30,000 plus who admire your great images. Congratulations :)

History is interesting and the POV is great

A very interesting story behind the mural.